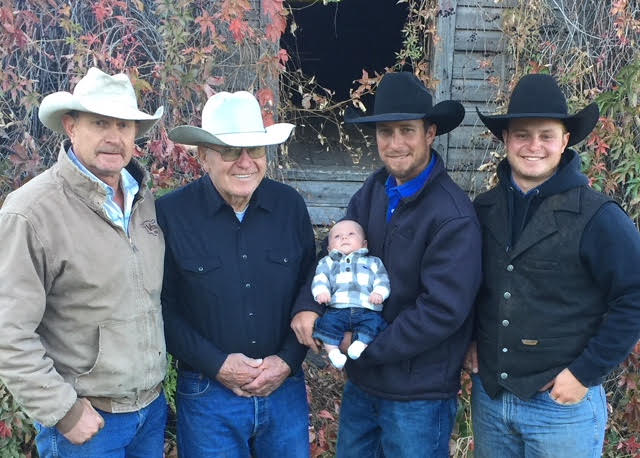 Theirs is the farm you see every time you run your dogs up White Hill or jog the cemetery loop. The turnoff is just past that church— you know, the one on the hill, just above town? There’s that Aspen Valley Land Trust sign where the drive T’s off to the south, towards Sopris– or hitting the single track at Prince Creek? It’s all the green you see between you and Main Street.

On our particular late afternoon, fully aware that autumn is peaking, the pungency of freshly cut alfalfa is especially nostalgic. Gravel rumbles under our tires as we amble through the agrarian rhythms of East Mesa. To the south, against Mount Sopris, two sandhill cranes flex and stretch in the golden light. It’s a first for this species on the ranch.

We’re meeting up with Parker Nieslanik, third-generation rancher and farmer. He and wife Cara have just given birth to their first child, a son, Colby James. It’ll be interesting to see what fatherhood and ranching have in store for a 30-year old guy shouldering the weight of cattle ranching in today’s West.

How many of us grew up close to farm fields, knew the farmer at the edge of the ‘hood? Snuck into their corn or alfalfa fields at night, playing hide and seek or sneaking our first beer? Who remembers tractors slowing traffic and the glorious sight of silos at dawn? All these things rush at me and I feel lucky to even be here, an excuse to step away from my keyboard and relive if only an hour, slower, richer times.

As we pull around the shop and wend our way to the house, we notice Grampa John sitting on a bench in faded jeans and a busted up Carhartt coat. His face is shadowed by a curving brim of worn, woven straw.  He looks content, off in the golden hour.  We’re not sure where to park, which house is which, and he’s clearly not going to help. He’s earned his evening peace, and that’s cool; I wouldn’t move either.

Two picturesque cabins, a few hundred yards apart, cozy into a sea of manicured lawn. An irrigation ditch meanders around and through the yards, the very watermark of their livelihoods.  The front porch of a quaint bungalow is filled with potted flowers and painted like a Catskills hideaway. Inviting, yes, but the wrong house, Grandma Theresa tells us, pointing us to the Lincoln log cabin across the ditch. We cross a cutesy footbridge and pass under a silver maple. Its massive, gnarled, Winnie the Pooh trunk is clearly rooted in the last century.  Weeping willow boughs sway and sylph near a vintage picnic table. The temperature drops in the dense shade of a venerable blue spruce. Ancient lightning scars trace up and down the trunks and limbs of trees in the yard.

With our hipster/Millennial Main Street right there behind us, none of this seems real. It’s beyond charming. Can I move here, too?

We make our way to the sunlight. In the alfalfa field towards Sopris, three enormou$ machines work the windrows. One of them swings a 180, taking several minutes to pull up to the house, amble across the view, and plop out a 1200-pound circular bale. The engine powers down and Parker leaps out of the cockpit, striding towards us.

With a Nieslanik Beef ball cap and dark shades, it’s impossible to see or read his face, but I know from the past that he’s a modest, handsome fella, “aw, shucks” meets Fight Club. Like any young man raised by multiple generations of hardworking people, he’s confident, polite and direct. His wedding band and black-burnished hands speak volumes of his values.

He leads us to the picnic table, stippled in spruce sap. Long before we catch sight of a digital smoker on the porch, our mouths water. We look at each other and chuckle. We’re in Parker’s world now. There’s an Amazon delivery of Huggies and baby goods left piled by the rusty basketball hoop. We chit chat, easing into the process of divining and storytelling. It’s hard to stop looking around. Framed by the trees, Mount Sopris and hay fields dominate. The embrace of the universe, cerulean blue, encompasses all of it.

I ask about the field he’s working, amazed at how much they’re getting– is it a first or second cut? They reseeded the alfalfa six years ago; it’s increasingly productive, the second cut this season. The richness of the windrows is deceptive, though, this being one of the hottest summers on record.

“The growing seasons are getting longer, by 20 days a year,” Parker concedes. “I betcha we could grow Carbondale sweet corn; it’s getting to be Olathe’s climate here.” I can see the farmer’s mind calculating, diversifying, wondering. “Our hay crop is a third of what it used to be. It’s the heat in the air. The soil is thirsty; it chokes out the grass even if you do have water. Everybody’s crops are down.”

It’s a hundred-year-old conversation, one that never changes in farming and ranching– not in books, not in movies, and certainly not in real life. Right now, Parker is more focused on how beef is evolving as a market, versus addressing water challenges.

Like any young buck needing to suss his own lay of the land, Parker had cut his ties for a while, studying ag business at Hastings College in Nebraska. Upon return, he still needed to stretch his wings. He worked construction for a few years, tasting the world out there. Land and family call when it’s left its mark. He came home.

“You couldn’t ask for a better way to grow up. I feel pretty fortunate,” Parker fesses. “I appreciate the land. Not something many people can do anymore… I’m honored and proud to have grown up here.  And to keep this place running and pass it onto my kids, if they’re interested.”

Farming and ranching have gone in two wildly divergent directions: global, with its goals of producing cheap food fast and easy; or local, which prioritizes sustainability, ecosystems, and humane husbandry in the pursuit of wholesome, clean food. With his heart tied to family and community, Parker is inclined to keep it local.

“Ranching is going to the casino every day,” says Parker. “It’s the water, the feed prices. You work 365 days a year and never know what you’re going to get paid for it. But loving what you do outweighs the dollar. That’s the number one thing my grampa taught me.”

The Nieslaniks have been on their own 200 acres since Grampa John, born of a local established ranching family, bought this land in, “I don’t know, 1957?” Parker guesses. They hold “three grazing permits totaling 150,000 acres of public land; lease 200 acres at Flying Dog; have a new 200-acre lease at Colorado Rocky Mountian School; and 40 more in El Jebel,” he says, ticking it ’em off. They run 400 cattle, 300 of which calve in the pasture adjacent to the Delaney Nature [dog] Park. Those are all the baby moo moos you see late winter/early spring every year. All these creatures are the social media darlings of Carbondale’s notorious Main Street cattle drives.

Climate science is indisputable and ranchers feel it.

We see it in our own lawns and gardens, this is not just a “drought”. Arid is the new reality in the West. If there’s anyone that gets it, it’s someone who works their land every day, watching for the first sprouts in the spring, waiting for the rain clouds, watching the thermometer, for first frost, first snow, runoff. Parker sees climate change in their hayfields and feels it in the bottom line.  The cost of feed has ranchers flooding the beef market, driving already questionable profits down. That mountain in the backdrop of local natural grocer MANA Foods? Same mountain Parker grew up ogling. Same mountain some of their cattle graze. That’s one of several closed-loop sustainability cycles Nieslaniks hitch their wagon to. How can you become a part of that? A beautiful question to ponder.

“We have to shift how we sell our cows,” Parker recognized. “So around a good steak, me and my dad and wife and brother decided to change things up to stay in the industry. We have to make our own market. We decided to grow grass-fed natural beef and we sell [directly] to the public at a fair and competitive price. We’re not trying to be Whole Foods. The goal is to have a product that everyone can afford, not just wealthy families.”

“One of the reasons we’re doing finished beef is that it’s all organic and it comes from here,” he emphasizes. “It feels cool. We still have to take 70-80 percent to the sale barn, but in the last three years, we’ve increased from 10 to 18 percent,” almost doubling local sales.

“People are eating more local, ‘know your farmer’ kind of thought. It’s almost like the whole culture is changing—I think we’re in the middle of a food ‘evolution’,” he says, referencing what we’re all learning in social media. “The ball is rolling faster. I think in five or ten years it’ll be shocking how differently people will be eating. I think we’re picking up traction with locals. It’s easy for people to go to City Market after work,” Parker admits, but, “you support me, I’ll support community.”

As the market shifts, hopefully, that 80 percent still winding up at the sale barn will stay local and be appreciated as grass-fed, clean organic beef that grew up in the same landscapes we all revere.

Staying in the game

In their bid to diversify, the Nieslaniks also raise pigs, which they market word of mouth, more as a side deal, taking advantage of the stillage they take back from the distillery. It’s a terrific opportunity to go in on with friends to get a taste of what whole, half and quarter purchasing entails. Like any hunter, you’ll have an assortment of cuts to play with and learn new meals, but you won’t have to field dress or process 🙂 Hogs are butchered into traditional cuts for you and delivered frozen– easy to parse out among foodie friends.

Currently, you can order organic beef from their website in whole, half or quarter, at a hanging-weight cost of $4.99 pound. For traditional cuts at competitive pricing, wrapped singly and frozen, you’re invited to call ahead and pick up directly at the ranch, 6 PM to 8 PM Monday through Friday– get to know your ranchers!  Deliveries from Glenwood Springs to Aspen are $20 a pop; in Carbondale, $10. Mana Foods on Hwy 133 and Sopris Avenue carries several different cuts as well.

Carbondale is expected to increase by several thousand new residents in the next few years. Around the United States and the globe, more and more people will move to cities, losing touch with places like the Nieslaniks’. Family farms will age out, sprouting homes instead of food. We’re all looking at ways to sustain our communities, to regroup and reground, simplifying our needs and footprints. So it’s pretty damn sweet to have opportunities and relationships like this still. Here are a few ways to plant your ‘steak’ in community: