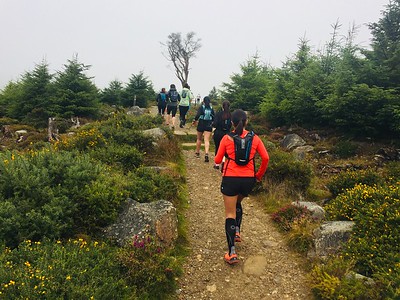 “My new reality is living as a runner with arthritis.”

In a town of elite athletes, where many have moved for the accessibility to, and an abundance of, superior recreation– what happens when life catches up to us? An injury (at any age) or a slowly senescing body–  how does it affect our sense of self or quality of life when we can no longer do our thing, the physical release that lights our fire, burns off stress, and lands us in afterglow?

At one point or another in our pursuits of bodily bliss, life can pull a number on us.

For Fish, a former managing editor at Trail Runner magazine and creator of Run Wild Retreats + Wellness, arthritis forced this longtime trail runner to reassess the life she had worked so hard to build.

“It prompted me to shift how I approach my running and self-care because it’s a chronic illness.” Fish speaks in a clear, light voice, free of self-pity or frustration. “A big part of chronic illness is that it’s fueled by stress. So even though I had already embarked on this path of trying to run in a way that’s more mindful in terms of what stress level my body can handle, now doing so with chronic illness makes it even more important. I can’t ignore it.”

Who hasn’t ignored the pain in search of that second wind? In our compulsion to push and train the body, to burn the calories, or beat your last time?

Colorado is the fittest state in the nation. Period.

And…Carbondale has its own reputation: for a level of athleticism born of its ties to the land, mountains, and rivers. And let’s admit it, to North Face and Patagonia. To Rock and Ice and Trail Runner; to 5Point, No Man’s Land, shucks, even Backbone Media. We’re the valley of the X Games, the Ragnar, and multiple World Cup events.  World-class and record-holding athletes queue up in Bonfire, Dos Gringos and City Market. There’s no room for excuses. There’s an incredible pressure to perform at an increasingly elite level. Bonedalians “Just Do It.”

Fish exudes “wholesome.” She’s ageless, beautiful, with a strong, elegant body. She has an admirable career spanning tourism, writing, speaking, and of course, running. She hasn’t a damn thing to prove. She simply wants to run.

“I can’t just “push through” the stress, and make my body and my mind “do” things when the consequences now are so high,” Fish acknowledges. “I know when my stress levels are high because then it’s followed by a period of complete incapacitation: I’m exhausted, I can’t think, my body hurts. I have to be mindful. I have to pay attention to what my body is telling me. It’s become such a big part of what Run Wild has become.” Fish launched Run Wild Retreats + Wellness in 2010 during her tenure with Trail Runner. RWR+W hosts mindful running retreats around the world. Catering to a breed she describes as “Type A and career-driven,” Fish recognizes herself in her RWR+W clients:

“It takes an open mind and an ability to relax into someone else leading the way.”

“For some of these women? It’s really hard for them to yield… but when I see them relax into the flow of things a little bit, even though they don’t know exactly what’s coming the rest of the day, or what’s coming tomorrow? What happens if you stop focusing on trying to control everything? And focus instead on the experiential? That’s a big shift for some people.”

When asked, Fish chuckles, admitting to being “very Type A.”

“It’s funny; I was talking to a friend of mine, he says “Oh, you do mindful running retreats.” He’s a guy, very Type A, and he figured, “Oh, someone who goes on a mindful running retreat must be so Type B!” And all I could think was “Wow, he doesn’t get it!” Because us Type A people need this so bad because we are so wound up. Type B people are like, “Yeah, whatever. I’ll do whatever you guys want to do!” That is not our client.” As many discover, it takes a getaway to untether ourselves from the constraints of everyday life.  Run Wild hosts four-day regional retreats and week-long international escapes. Think Telluride, Moab; or go big in the Dolomites, the sunbaked crags of Spain and Italy, or the lusher landscapes of Ireland and Iceland.

“The retreats are designed to not only explore a beautiful new destination through running (which is a really fun thing to do!)  but also to give runners the space to incorporate the mindfulness principles that we introduce to the running experience,” Fish explains.

In the retreat setting, runners are introduced to new ways that may differ from the way they are used to running.

“They learn to pay attention to what their bodies are telling them. Runners can then use this as a way to gauge their stress and run in a way that helps reduce their stress rather than add to it.”

Wellness workshops around these running experiences give these alpha dogs the opportunity to reflect on the experiences and talk about them. The sharing process can give runners deeper insight into where they’re at.

“What might they want to do differently when they get home?” Fish asks. “What really fills them up, versus what depletes them?”

These are questions Fish was forced to examine in the arc of her own running.

“It really stared for me in 2011, a period of deep, deep exhaustion for a whole long list of reasons. I was just doing too much. Like a lot of us, waaaaay too much. I hit a breaking point where I couldn’t function. I was desperate.”

Like any Type A driven woman, she dove into her dilemma, probing and testing multiple modalities. Ultimately, she discovered she was making more work for herself.

“Too much work,” she sighs.

For the first four years of Run Wild, she had been working full-time with Trail Runner.  She left that for part-time work in marketing consulting in addition to growing and Run Wild– and being a wife and mom.

“It wasn’t until I actually got serious about my mindfulness practice that I began to see a shift.”

She was forced to admit “I can’t add more. I have to take away and just focus on the basics: get enough sleep, get enough rest, get some gentle movement. I pared away a bunch of things and the mindfulness practice became the glue that held it all together. Every day became a choice of how I was going to show up. Am I going to fall into my usual pattern of go go go, push push push, do more more more? Or am I going to listen to my body and just slow down?”

To create the mindful programming behind Run Wild, Fish essentially guinea-pigged herself in her research.

“I can put this into practice and I can test this. I can iterate it and I can document it. Every single retreat I’ve taught for the last eight years, I present these ideas and see what happens when [runners] put it into practice. I didn’t want to just read stuff in a book and then say, “Oh, this is how you do it.” I like to read different sources and then ask, “What’s the common message here, and how does it align with running?” And then I introduce it to the runners and see what happens when they actually implement it and I get their feedback afterward. It’s been many years of testing and iterating, not just on myself but all the people I work with.” In all her years of speaking, writing, inquiry, and scrutiny, Fish finds that she genuinely loves creating transformational opportunities.

“How many people in a group are going to respond to this day’s lesson or experience?” she wonders. “It’s different every time.”

Run Wild leads retreats throughout the year, near and far, with several entry points.

Level I caters to beginners and those navigating injury and healing. Retreat leaders guide newbies through posture, technique, and consistency on shorter walk-runs. Runners develop a sustainable practice free of worry, injury, and burnout. Surrounded by others of similar experience, RWR+W promises “There’s no need to worry about being the “slowest!” All levels interweave guided runs with Fish’s approach of an integrated practice in both life and running: applied mindfulness for better health, stress management, and the flow and ease in life we need to flourish.

As a 20-year trail runner hobbling on crutches, Fish’s story is one this writer has been following for the last year, navigating PT and awaiting the insurance go-ahead for surgery throughout all of 2018. Before that, IT band issues hampered the entire 2017 running season. Elinor Fish’s story resonates at a soul level.  With two more decades of potential running still, a retreat experience with Run Wild is on the Bucket List. Trail running for a week with a bunch of other trail junkies? Exploring stunning and vast landscapes? Gaining insight into my running posture, foot- and breathwork? Popping a beer with other women runners? Eating amazing food, sharing laughter, hurdles, and triumphs? There’s no question: I’m in.

Want to know more? Amanda Loudon’s 2017 Washington Post story, “Running is supposed to make you feel good. So why did I just feel more stressed?” is a terrific write up on her own retreat experience with Run Wild. For the day to day rhythms and the lessons to be learned, give it a click. For daily Insta-piration, go here.  And then (wink, wink) I think you’ll need this: